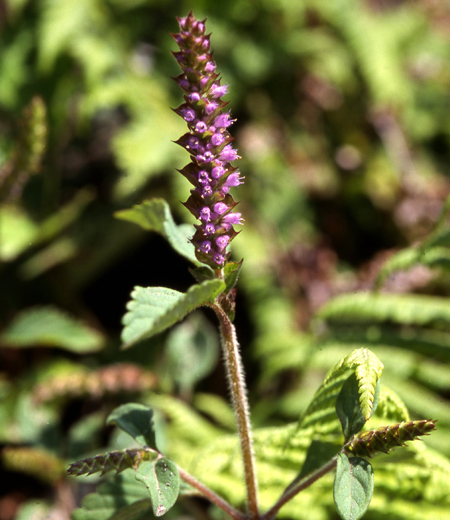 Elsholtzia ciliata Labiatae
They are an annual plant that grow at the pool of forests in the mountain areas, grasslands at the roadsides, and at sunny places, and that has strong incense. The stalk is circular in cross-section and white soft glandular trichome grows in clusters with the top split in many cases. On spikes (Kasui: small flowers gathering to be like head of plant) about 10 to 15 cm long, pale purple-tinged flowers whorled. The appearance of spikes (Kasui) rolling back is compared as Naginata, a partisana pole sword, and this plant is named ‘Elsholtzia ciliata’ (Naginata Kouzyu). ‘Kouzyu’ ia a Chinese name. The flower is about 5 mm long. As the edge is split off minutely, it looks like growing glandular trichome, and roundish bract leaf spread (Houyou: a modified leaf or leaflike part just below flower stalk) at the back of the leaf get into line. The leaf is egged-shaped about 3 to 9 cm long, about 1 to 4 cm wide with the sharp tip, grows opposite each other on the stalk. Lot of subspecies sprout at the back of the leaves, and sawtooth (Kyoshi: tooth-like rough part like a saw at the root of a leaf) at the edge.