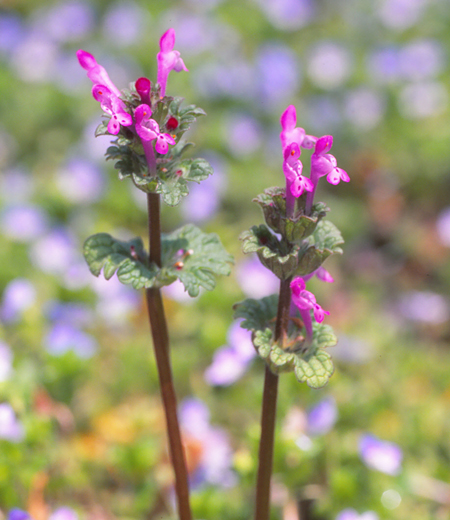 Lamium amplexicaule Labiatae
Biennial herbs found on sunny roadside and at edges of farmland. In Mt. Takao, often found in residential areas. Two half-round shaped opposite leaves resembling lotus seat under Budda’s statue, hence the Japnese name Hotokeno-za literally meaning the seat under Buddha’s statud. Also called as Sankai-gusa literally meaning three stories plants because leaves are placed in tiers. Flowers are tubular lip-shaped, 2 cm long, red-purple and bloom in cluster from petioles of leaves on upper parts of stems. Some of them are cleistogamous flowers that do not open until it die off and self-pollinate without the support of insects. Leaves are 1 to 2 cm long and fan shaped with toothed margins. One of seven herbs of spring in Japan is the same Japanese name with this plant Hotokenoza but this is lapsana apogonoides (nipplewort) in asteraceae family.