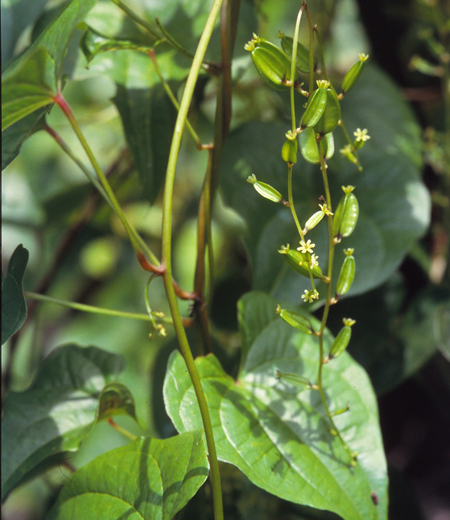 Dioscorea tokoro Dioscoreaceae
Perennial herbs vines (grow for several years from their same root system) found in mountains. Resembles dioscorea japonica in the same family but leaves of this plants are alternate and does not have bulblets (spherical sprout with nutrients). Underground stems are thick and hard and have many fibers. Often used as a new year ornaments but it is too biter to eat. The Japanese name Oni-doko-ro written as ogre field aged man was named because the fibrous roots resemble aged man on field. Flowers are 5 mm in diameter and light yellow-green. Bloom many flowers on long flower stems (without leaves). Have male and female flowers, male flowers bloom upright from petioles but female flowers bloom dropping. Leaves are 5 to 12 cm round heart-shaped with pointed tip. After flowering, bear fruits with three fins facing upward. Seeds are oval-shaped with wings on one side.