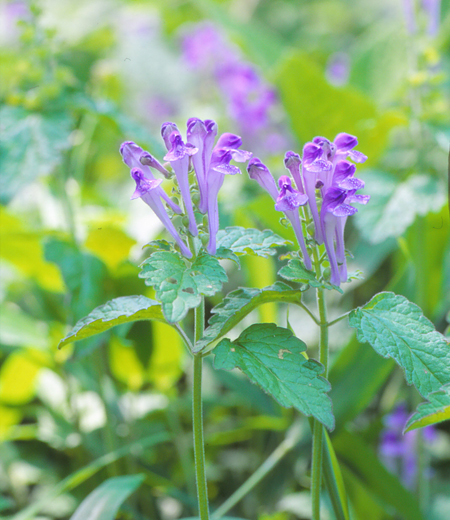 Scutellaria brachyspica Labiatae
Perennial herbs found at forest edges and on grasslands from the base of mountains to mountain peak. In Mt. Takao, plants in scutellaria genes and scutellaria pekinensis var. transitra have leaves and truss of flowers on one side of stem but this species have leaves covering upper parts of stems. Flowers are curved tubular shape and about 2 cm long. Bloom some upright flowers at the tip of stem. The name of scutellaria, Tatsunami-so come from the flower shape resembling the crest of wave. This species Oka-tatsunamiso literally meaning hills scutellaria was named because scutellaria grows on hills. Flowers are light blue-purple and stems have short hair facing downwards. Leaves are wide egg-shaped with roughly tooted margins and larger on upper parts about 5 cm long. After flowering, calyx become plate-like shape and close. Seeds grew inside of calyx pop when ripen.