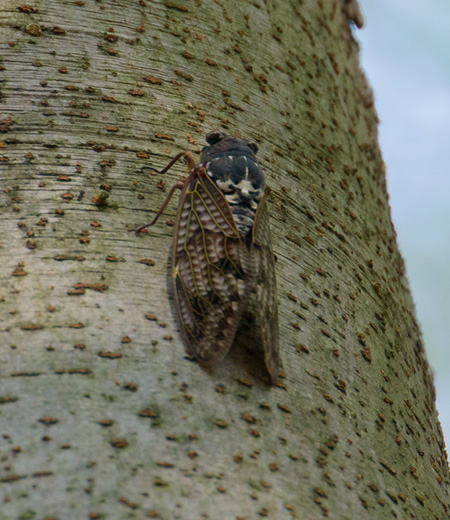 Graptopsaltria nigrofuscata Cicadidae
They live widely in Hokkaido, main land Honsyu, Shikoku, Kyusyu as well as Tsushima Island and Yakushima Island.
Thought they inhabit at copses and forests in plain ground and at the mountain areas, they can take a sip of sap.
They are seen at the park where there are large trees and at the orchard that Japanese pears are grown.
They are one of national wide popular bees to see most occasionally.
Male cicadas only shrill among Cicadoidea and their shrilling sounds like ‘Jyu-ey’ or ‘Jour-Jour-Jour-Jour’.
It is said that their name is taken after this shrilling sound very similar to the frying sound.
Wings are opacity and dark reddish-brown color with patterns of light and shade here and there.
Female lays their eggs into the tree bark.
Eggs incubate about in 1 year.
The larvae live underground on sap sucking from the tree root, and crawl up to the ground in 6 to 7 years to emerge out of pupa into adult insect.