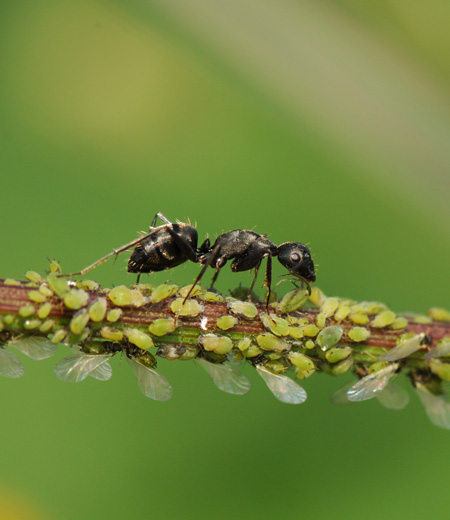 Camponotus japonicas Formicidae
Main Region: Hokkaido, Honshu, Shikoku, Kyushu, Tsushima and Yaku Island. Found in grasslands from flatlands to mountains. Create nest in open ground, thus often found at parks and gardens even in cities. Is the largest species in formicidae native to Japan, worker ants are about 10 mm and queen ant is 17 mm. Body color is black with brownish abdomen. Live in a large colony with a queen ant in underground lair. Catching foods are the job for worker ants. Work in solo or with some and feed on dead insects and body fluids of plant louse. From May to June, male ant with wings and queen ant come out from lair for marriage flight. When they are back on ground, female ant drop wings and create another lair. Take care of some of emerged ants in early stages but once they become worker ants, she becomes queen ant continuously lay eggs.