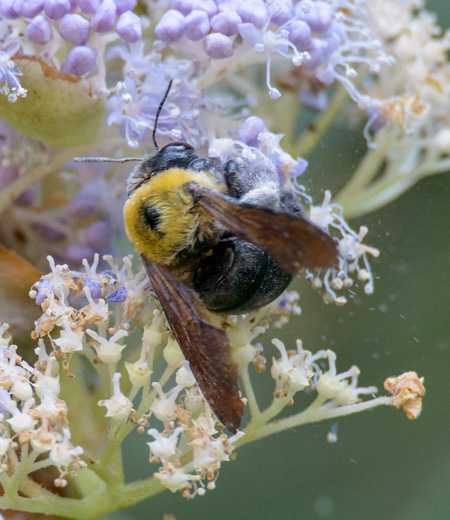 Xylocopa appendiculata Apidae
They live widely in main land Honsyu, Shikoku, Kyusyu as well as Tsushima Island and Yakushima Island.
Thought they inhabit at copse at the mountain areas, and around the green tract areas in plan ground, consequently, we can see them in the garden or park in residential districts.
Early spring to early summer, they boom out to appear for various flowers to collect pollen and nectar for their own bait.
Male Apidae has their own territory at the mountain ridge or plain field and we can sometimes see them watching to protect their own territory while they’re hovering.
They dig out shrub or withered branch for breeding place to raise their children in there.
As their sounds of wings are loud and they are densely covered with thick hair, we tend to be afraid of them, but the fact is they’re docile and hardly attack human.