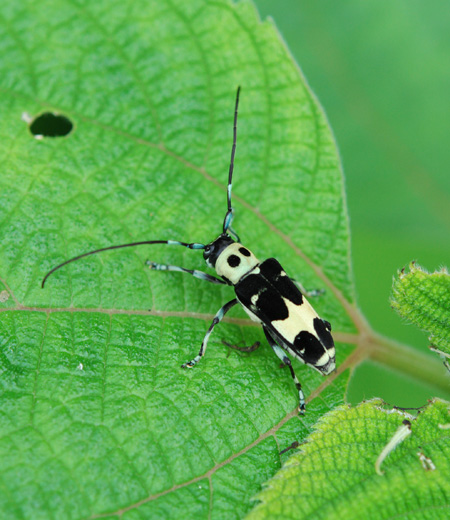 Paraglenea fortune(Ramie Longicorn Beetle) Cerambycidae
Main region: Honshu (West of Kanto region), Shikoku, Kyushu, Tsushima, Oki Island and Tanega Island.
Found in woods and surrounding green space from flatlands to mountains.
This is a foreign species came to Nagasaki port with ramie in urticaceae family imported from China during Edo-period.
Main region came up north due to global warming.
Body color is beautiful with white-green and large black spots.
There were not any in Mt. Takao but started to be seen from early 1990s.
Is now one of the species in cerambycidae often seen from May to August.
Are active during daytime and feed on leaves and stems of ramie, boehmeria nivea var. nipononivea, boehmeria japonica, Japanese lime and hibiscus syriacus.
Larvae feed on stems and roots of same plants that adults feed on.