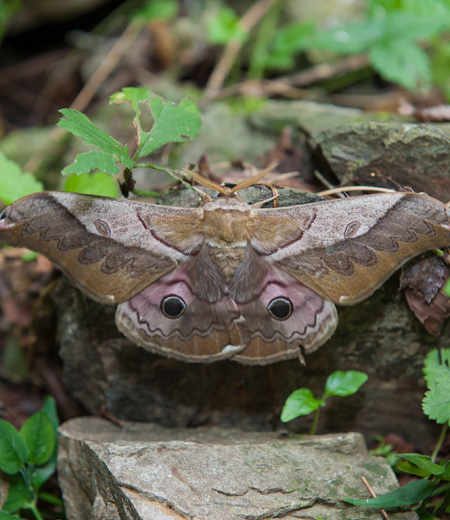 Saturnia japonica Saturniidae
Main region: Hokkaido, Honshu, Shikoku, Kyushu, Tsushima and Yaku Island. Found in forests and woods from flatlands to mountains. Japanese name is Kusu-san literally meaning silkworm on camphor laurel. Body color varies to individuals among the same species from yellow-brown, red-brown to orange. Hind wings have distinct eyespots in the center and the ones on fore wings are not as distinct but have patterns resembling side face of lizard. Are attracted to lights at night with Japanese oak silkmoth and rest under the eaves nearby. Caterpillars are green with white long hair and are also known as Shiraga-taro literally meaning white haired boy. Feed on camphor laurel, Japanese zelkova and ginkgo. Cocoons are like mesh with and also called as Sukashi-tawara literally meaning sheer rice straw bag and the empty ones are often found in grasslands near forest trails.