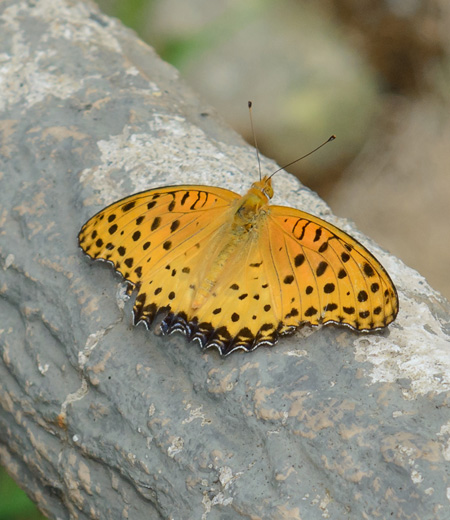 Argyreus hyperbius（Indian Fritillary） Nymphalidae
Main Region: Honshu (West of Kanto region), Shikoku, Kyushu and Nansei Islands.
Found in southern areas as seen from main regions.
Found in grasslands and green spaces from flatlands to low elevations, and also at parks and farmlands.
Caterpillars feed on leaves of pansy, thus it is often seen in cities.
Japanese name Tsuma-guro -hyo-mon literally meaning corner pointed black leopard-like patterns was named because tips of fore wings are black that is unique to female and male have leopard-like patterns on entire body.
Have black edges at the bottom of hind wings that can be distinguished from other butterflies in argynnini tribe.
Have light brown body color with yellow-brown leopard-like patterns on the back of wings.
Caterpillars feed on leaves of plants in violaceae family.