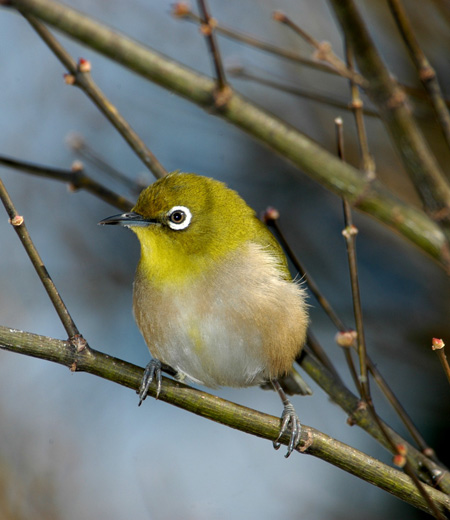 Zosterops japonica (Japanese White-eye) Selected
Found in forests from flatlands to low elevations and also at parks, gardens and backyards of residence. The body color of male and female is almost the same and have yellow-green from head to the back and distinct ring of white feathers around eyes. Most of them live in pairs throughout a year and move frequently among trees and hunt for spiders and plant louses. Also likes nectar and pollen of flowers and fly to camellia, cherry blossoms and Japanese ume flowers for nectar and pollen. At these tree, the face of this species are covered with pollen, thus they have the role of pollinating. The breeding season is from April to June. Build a cup-shaped nest with moss and stems of plants glued with spider’s threads. Lay three to five eggs in a season.