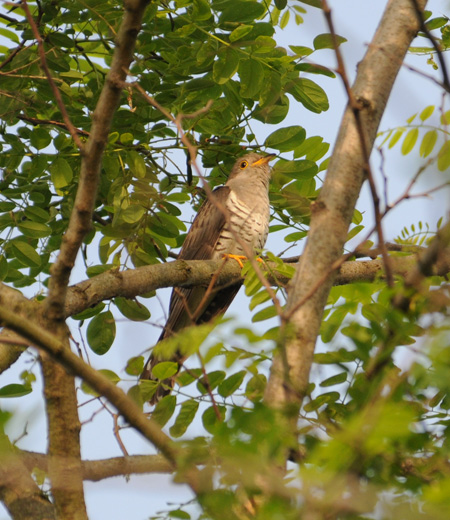 Cuculus poliocephalus (Little Cuckoo) Selected
Is the same family with cuckoo and found in bright forests in low elevations. Male warbles loudly “kyo kyo kyo” sounding like “tokkyo kyoka-kyoku” literally meaning patent approval office, which is a very famous tongue twister. It also sounded like “hototogisu”, hence the Japanese name Hototogisui was named.
The back of adult birds is gray with black stripe patterns on chest. Male and female have same body color but some female are red-brown. Mainly feed on insects and hairy caterpillars and hornworms are favorites. Are brood parasites which means to lay eggs on other bird’s nest. Lay eggs often in bush warbler’s nest and the color of eggs are brown similar to the ones of bush warbler. The breeding season is from June to August. Take one egg out from the nest and lay one egg instead. In autumn, fly to Southeast Asia to spent winter.

●Body Length  about 28 cm
●Season  May to October (Summer bird, fly to one area from spring to summer for breeding and fly back to southern areas in autumn.)