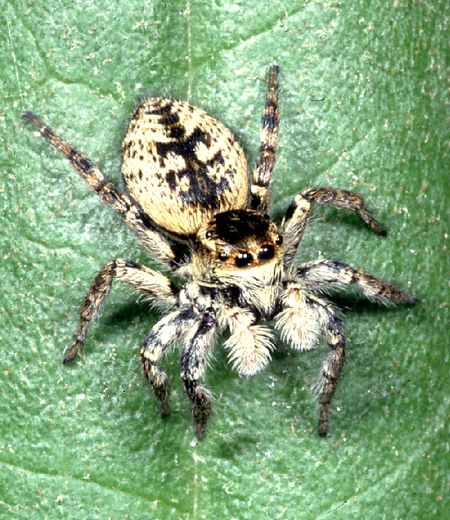 Carrhotus xanthogramma Salticidae
Main Region: Hokkaido, Honshu, Shikoku and Kyushu. Found in woods and green space from flatlands to low elevations and also at gardens of residence and parks in cities. Sometimes, come into residence for food. Body length is less than 1mm. Cephalothorax is black and abdomen is brown with black patterns in center for male. Female body is covered by light brown hair. Walk and hunt prey insects on ground and grass and sometimes jump up. Do not build a web but emit thread while walking. This thread is used to hang from the higher place or go back to where they were. The Japanese name Neko-haetori literally meaning cat fly-catcher was named because they catch small insects including flies.