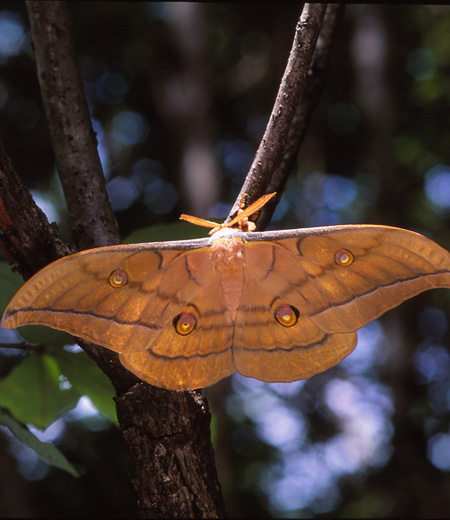 Antheraea yamamai (Japanese Oak Silkmoth) Saturniidae
Main region: Hokkaido, Honshu, Shikoku, Kyushu, Tsushima and Yaku Island.
Found in woods and forests from flatlands to mountains.
The large species become up to 15 cm and it is the largest species in moths.
Are often found in mountains and used to reel silk off from cocoons of this species, hence the Japanese name Yama-mayu literally meaning mountain cocoons.
Wings are red-brown to ocher depends on individual species with long dark brown line along the edges.
Have eyespots in the center of wings.
Antennae differ from male and female, male is feathery and female is comb-like shaped.
Are active at night and often attracted to lights.
Adults do not feed on anything and live on nutrients reserved as caterpillars.
Caterpillars feed on quercus acutissima and quercus serrata.
Color of cocoons is similar to silkworm but this species are light green.